Skip to content
Matthew Sweet Uncategorized January 16, 2016
​How do you know it’s the truth?

Everything we see in the news, in the papers, in articles and in online publications has passed through many layers.

The information we receive is never first-hand. It has to go from the people involved, to the reporter, through the editorial process and then be beamed into our brains.

And the institutions that give us our news are also responsible for how it is framed. After all, information is useful only when it’s provided in context. They set that context. They choose how to frame what they tell us.

It’s like a society wide game of Chinese whispers. What really happened is often not what is described at the end of the circle.

So the danger for us is that we all become parrots. We end up regurgitating heavily filtered information, usually without the context, as if it were undeniable fact. More dangerously, we use that very same information to make judgements and decisions about the world we live in.

The power of the media only increases as we become more connected electronically and more estranged physically.

The world used to formed of millions of small, local communities. Know the world is one big village, but the only knowledge we have of our neighbours is what is communicated to us through the mechanisms of media.

Yesterday, I was reviewing Soul of the Marionette by John Gray. While the book is about human problems and human freedom, Gray spends some time talking about the power of the media and the narratives they create:

​“Twenty-four-hour news media generate a chronic state of low-intensity anxiety together with a tranquilising sense of security. Shaping a perception of the world as endemically dangerous, a landscape of terror can be projected anywhere via television screens, laptops and mobile devices. This landscape frames the view of the world, while those who inhabit it are enclosed in a zone of safety. More than on any other single factor, the stability of advanced societies depends on how perceptions are shaped by the media.”

Physically, being in a continual state of anxiety and stress can lead to all sorts of bodily dysfunctions and disease. It’s something I’m learning about from Robert Sapolski’s Why Zebras Don’t Get Ulcers. But the main point seems to be that chronic stress is bad.

It also means we are exposed to more noise. That is, more things that don’t really matter. More information equates to more noise and less ability to discern what is signal, what is important.

Of course the antidote to psychological stressors is complex, but one simple measure offers some relief:

Denarrating means instigating an information diet. It means filtering who and what and when you listen. It means eliminating the noise from your environment so you can have a chance to think and decide.

Denarrating seems only to be an antidote for psychological noise, but owing to the strength of the mind-body connection, I have a suspicion that denarrating the mind de-stresses the body too.

Another consequence of our connectedness is the rate at which information spreads. Natural disasters are known about minutes after they occur. Important develops are broadcast instantaneously.

This speed allows us to stay up-to-date, to respond quickly and effectively and to solicit help from those in the best position to give it.

But it also means that impulsive, reactive behaviour is amplified. Cascades of emotional, ill-advised actions can generate momentum and start a string of events that can quickly become irreversible.

The opposite of this would be information spreading slowly. That’s how it used to be.

I’m sure no one would like to go back to the time when it took weeks for a message to traverse a continent. But back then, they had one significant advantage that we can never regain. The slowness of the spread of information meant that there was more time for the noise to be sorted from the signal. The cost in both time and money of transmitting meant that only the most important, the most relevant spread.

Now, because the event is so recent, so vivid, we don’t have the perspective or the time to sort noise from signal, so we send it all anyway.

Ask anyone if they fall prey to advertising and deliberately skewed media narratives, and they’ll strongly disagree. They don’t fall for such tricks. They see right through all that.

Sadly, everyone thinks that about themselves. But the reality is, when it comes to media and information, you are what you consume. Everything you read, everything you listen to, everything you watch has a subtle, often imperceptible influence over you. An effect which is more than zero.

The only way to not fall prey to this is to not consume it. But of course, we cannot eliminate all information from our lives. We need some. So the first step to not having your perceptions shaped by the media is to consume less of their offering.

Another way to de-bias yourself is to learn about how the media system actually works. Understanding something is the best way to arm yourself against it.

The first book that comes to mind is Ryan Holiday’s Trust Me I’m Lying. In particular there’s one image that illustrates how dangerous reliance on media can be. Holiday calls it “the news funnel”: 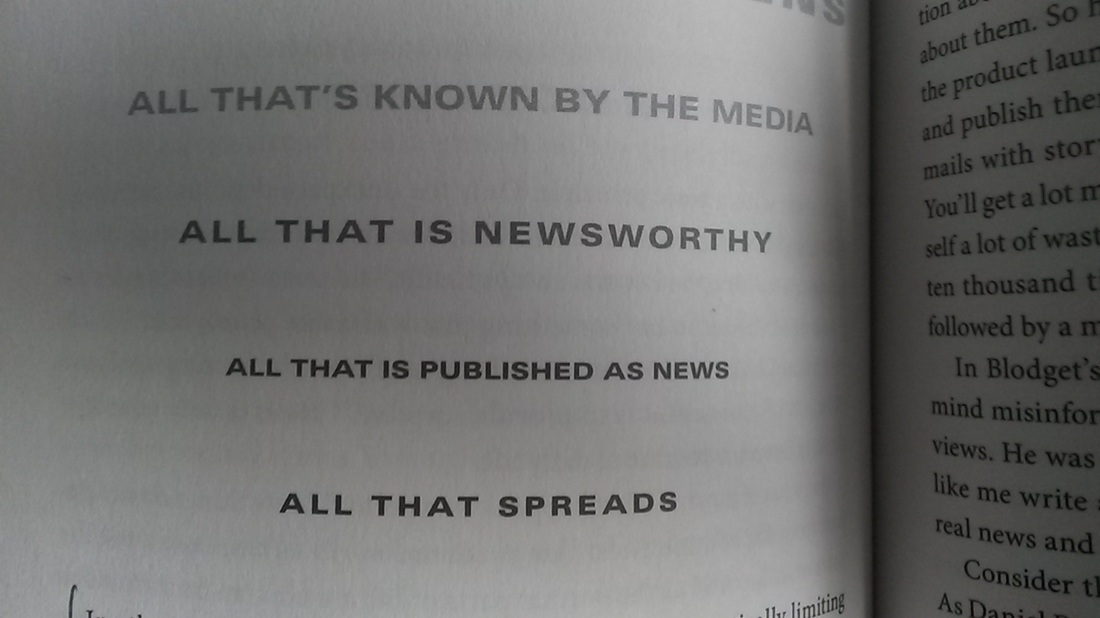 Another book that highlights the power and danger of media is States of Denial by Stanley Cohen. It’s about atrocities and instances of suffering, and the mechanisms victims, perpetrators and witnesses use to cope with them.

There’s a section on how charities like Oxfam solicit contributions and how media companies don’t just report disasters and atrocities, they decide which ones get responded to. Naturally, you’d think that the bigger the disaster, the more widely it would be reported, and consequently, that we’d mobilise a larger response.

Journalist and reporters aren’t bound by this logic. Newspapers and publications sell a product, so their methodology is not to devote column inches in relation to the scale of the problem. What they report on is what their audience is most likely to read.

Consider an example of this logic at play.

There’s an earthquake. It’s a small one, but the images and appeals of the residents hit by it are evocative and heart-wrenching, so a publication picks them up.

These images are detected by rival companies, so they re-print and utilise their assets to get more information. Now there’s a whole bunch of publications reporting on this one earthquake. The increase in interest leads it to be picked up on major news channels.

It comes to the attention of charities and non-profits. They pick up the cause. Soon campaigns are organised. Social media explodes with appeals and provocations for contributions.

Paraphrasing Cohen, an event that is of relatively minor local impact gets a disproportionately large, global response.

Holiday might term this escalation of interest and attention, “trading up the chain”. Cohen says: “Coverage is so selective that the media in effect create a disaster when they recognise it.”

Our relationship with what we consume impacts our view of the world.

If all we see is pain and suffering, it becomes very difficult to shake that sadness. If all we see is happiness and prosperity, we get badly hurt when our vision is stripped away.

Our view of the world will be divorced from reality and we will see the world through somebody else’s lens.