When I get to this stage, I’ll typically do one of two things. I’ll shut off my laptop, put it in the cupboard, write out my to-do list for the next day, and spend the remainder of the day disconnected. Or I’ll stay online.

I’ll browse social media, seeing what articles I’ve saved and bookmarked. I’ll find some people and ideas that seem interesting and dig deeper. I’ll click around YouTube, usually starting from a video by someone like Nerdwriter1. I might start playing around with the configuration of my laptop, changing settings and customising various functions. Or I might get lost down a rabbit-hole beginning at sites like Cool Tools, Ribbonfarm, Zen Habits, Wikipedia or BrainPickings.

Sometimes, I end up doing this when my day isn’t finished. When I have things to do and people to respond to. And then it becomes a problem. See, I sit at my desk. So if I’m supposed to be going outside and training, I’ll just delay and continue sitting and clicking. It’s easier than getting up and, you know, expending effort.

A few weeks ago, having discharged my obligations for the day and having no other plans, I began one of these sessions of impulsive exploration. I ended up—don’t ask me how—looking at different meditation postures. I ended up reading about zazen (the Zen practice of sitting) and seiza (a traditional Japanese sitting posture). From there, I launched into an exploration of Japanese lifestyle. I learnt about tatami rooms, different elements of Japanese architecture and key artifacts of Japanese home life. Two, related to meditation, that I came across were the zafu and the zabuton. Basically, a mat and a cushion which aids sitting for long periods of time. I ended up buying these for my study.

I also watched some short documentaries about Japanese home life. One thing I noticed was that they used these tiny tables, called chabadai. I thought it would be handy having one of those in my study as well. But rather than paying over the odds for some traditional Japanese-style floor table, I purchased a laptop table. It’s less Zen, but it performs essentially the same function. And yesterday, I surprised myself because I found another use for that table.

I’ve long meant to build or purchase some sort of standing desk for myself. It’s one of those things that you want to do, but put off indefinitely for no particular reason. I’ve wanted to do it because I know it helps with posture, and I know I spend too much time slouched at my desk. So I finally did something about it. I got the table out, put it on top of my desk, and attached a monitor arm. Now, I have myself a standing desk. 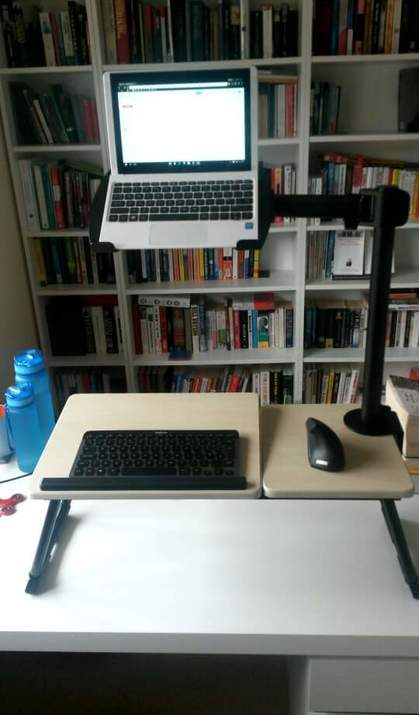 Now, I know that everyone is sick to death of hearing phrases like “sitting is the new smoking,” so I’m only going to talk about one benefit of standing desks. It’s one that I haven’t seen mentioned: switching costs.

A loose definition of a switching cost is what it takes—in terms of time, energy, attention, or money—to switch from one product or service to another similar one. For example, the cost of switching from Microsoft Word to an open source word processor like Libre Office is relatively low. But switching a long-running, popular website from a simple provider like Squarespace to the more powerful WordPress platform is a lot more costly.

Switching costs come into play in personal workflow and productivity too. Especially when they’re considered, not in relation to jumping between products and services, but in switching between activities. For example, for me to go from working on an essay to bouncing around social media isn’t costly. All it requires is a few clicks. But for me to go from browsing the net to training in the gym costs a lot more. I have to close off what I’m doing, put my laptop away, get changed, get together my training gear, and go to where I’m training. See the difference?

Often, the hardest behaviours to switch out of aren’t associated with work. It’s easy to slip out of doing something that is cognitively demanding. It’s way harder to switch back into something that is challenging. To go from checking Facebook to working on an important project is much harder than the reverse. And the switch into demanding tasks is made harder when you’re sitting.

Sitting is a low effort posture. You can sit for hours and not get tired. Sure, your muscles can tighten up. But generally, we can get real, real comfortable. Standing, on the other hand, is an active posture. We can stand for hours, but to do so requires a baseline level of movement to continually shift and adjust position and posture.

That’s the un-realised benefit of standing. When you’re standing, switching is easier because you’re already in an active posture. You don’t have to gather the willpower to stand up, you already are. You can move between activities more deftly when you work in a more active posture.

That was going to be the end of this post. But there’s one question that this observation raises, and I feel it necessary to address it. If switching costs are higher in a sitting posture than they are in a standing posture, what happens in a state of flow or immersion? If I’m sat down, completely absorbed in some creative work, aren’t the higher switching costs an advantage?

Similarly, does the activeness of a standing posture make it harder for me to enter a flow state? The advantage of sitting is the inertia, the stillness. The inertia allows you access to a deep state of focus. Can you easily enter the same frame of mind whilst standing, whilst shifting and shuffling and readjusting your position?