This is because these two disciplines occupy the poles of human action, at least in terms of participation. Martial arts are concerned with individual conflict; military history is concerned with collective conflict. By forming an understanding of these two, it’s possible to grasp all the ideals and principles of strategy and figure out how to enact them in a variety of scenarios.

I’ve begun to think this because the more I practise and learn about Brazilian jiu-jitsu, the more I see it overlapping with what I’ve learnt about history, politics, business and warfare. And I think it’s more than mere confirmation bias.

For example, last night we were working on a particular position. From that one position, we looked at a variety of options and attacks, one of which was an armlock. Now, attempting that armlock, depending on how the relative position of the two competitors played out, could either lead to an actual submission, or could lead to an advancement to a more dominant position. And the point that was emphasised by the instructor was this: before you execute the move, you don’t know which it’s going to lead to.

On the drive home, I was thinking about this idea, about the uncertainty of possible outcomes. In the above scenario, it’s akin to putting someone on the horns of a dilemma, giving someone a selection of options that, in all cases, result in a gain for you and a loss for them. 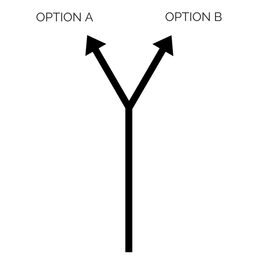 Robert Greene puts it better than I can. His thirty-first law of power is “Control the options: get others to play with the cards you deal.”

“The best deceptions are the ones that seem to give the other person a choice. Your victims feel they are in control, but are actually your puppets. Give people options that come out in your favor whichever one they choose. Force them to make choices between the lesser of two evils, both of which serve your purpose. Put them on the horns of a dilemma and they are gored wherever they turn.”

The horns approach visualised is a large “Y”. The central branch is your path, and from that path stems two objectives. You force your adversary to decide which to defend and then attack the other. That’s the ideal version anyway. The problem is that waiting for the opponent to commit before you do requires composure, nerve, deception and an ability to improvise.

What usually happens is that you present multiple options and then give off signals that reveal your preferences. The opponent then  responds to your signals, rather than deciding for himself what he wants to protect/give up. The result is a loss of initiative on your part.

Essentially, what’s happening is that you’re deciding before the last possible moment, committing before necessity forces you to commit, and thus letting the opponent dictate the terms of the conflict.

Another way to think of this is via the metaphor of route planning. If you’re driving somewhere and you have two possible routes, both of which take an equal amount of time, the chances are you have a preference between the two. Which means that you know in advance which way you’re going to go. But to maintain the upper hand in a conflict scenario, you decide only when you have to make an irreversible choice. This is most easy to visualise if we modify the “Y” diagram above. 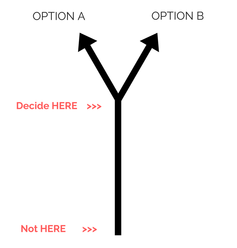 The point of optionality, the power inherent within it, persists for as long as you remain uncommitted, for as long as you abstain from making an irreversible decision. And to get the most from this optionality, you need to make that irreversible decision as late as possible. Doing so has three key advantages: first, it gives you more time to accumulate inputs and information and make a better decision; second, it makes your actions harder to preempt and defend against; third, it ensures you stay in control of the tempo and direction of the conflict.
Published June 20, 2017August 19, 2021