Skip to content
Matthew Sweet Uncategorized August 7, 2017
Imagine we classified all the people in the world according to the breadth and depth of their knowledge. The spectrum for depth of knowledge would be deep to shallow. The spectrum for breadth would be wide to narrow. This could be translated into the following 2×2: 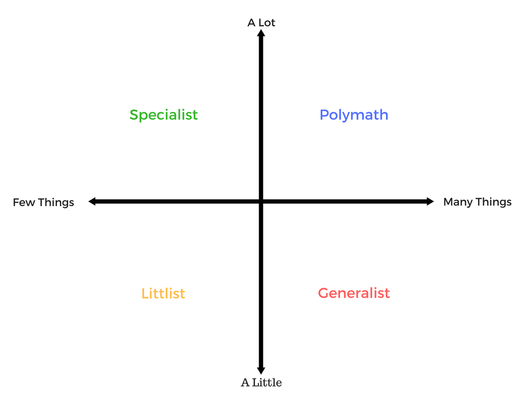 The benefits of being a polymath are self-evident. But people who know a lot about a lot of things are rare. Especially when “a lot” is considered to mean “near-mastery of a domain”. Our understanding of the world has multiplied at a rate that makes it difficult for a high proportion of people to comprehend multiple, diverse disciplines. As a result, polymaths make up the smallest slice of the human populace.

My intention is not to belittle the littlists. The opposite, in fact. I include myself within their ranks, and I’d like to point out the virtues of being in such a position. The first is that, to a littlist, everything is a wonder. Because a littlist doesn’t know much about many things, his entire environment is a source of inspiration and a cause for curiosity. The simplest things are alluring and intriguing. Littlists do not need to push the boundaries of a domain for kicks because they’re in awe of the movement of clouds, the growing of trees, the passing of seasons, and the expansion and contraction of their own lungs.

The second virtue is a consequence of the first. When everything is a wonder, inevitably, you end up asking how it all works. In this sense, the world is full of possibilities. Not knowing how it actually works, you’re compelled to imagine how it could work, and these imaginings are not impeded by the burden of knowledge. That’s a beautiful thing, an unshackled imagination.

Now, look at the two virtues of being a littlist: a sense of wonder and an ability to imagine and explore possibilities. Does that not look like childhood? What are children but mini-beings who are fascinated and excited by the world because they don’t know how it works?

With this is mind, it’s possible to say that everyone is a littlist for some period of time, usually during childhood. We could also say that the point of an education system is to convert littlists in generalists or specialists.

Two final observations. The first: when we criticise educational systems, we’re not bemoaning the attempt to aide people in the transition from littlist to generalist/specialist. What we’re criticising is the fact that, more often than not, the virtues inherent in being a littlist get left at the door. Mass education results in the majority misplacing their sense of wonder and imagination. At a terrifying rate, education causes a disillusionment with the idea of lifelong learning.

The second is that mass education isn’t designed to produce polymaths. At many different stages, it forces a student to narrow down, to focus, to make very-hard-to-reverse decisions about things they’re completely uncertain about. And if someone does make it through these decisions and go on to master multiple disciplines, it’s usually in spite of the educational system, not because of it.