Skip to content
Matthew Sweet Uncategorized February 19, 2018
One of the central ideas in Boydian command structure is contained in the diagram below. 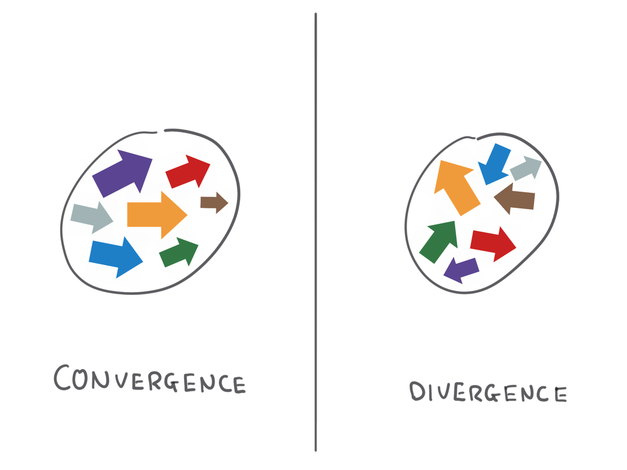 Hypothesis: teams which can align the efforts of its people will outperform the teams that can’t. It’s a basic but profound observation. When individuals unite and pull—or push—in the same direction disproportionate outcomes become possible. Quantified, one thousand people individually trying to climb the same wall is less effective than one thousand people banding together to get everyone over it.

But something I had not realised is that the idea of convergence-versus-divergence scales down to the individual level. Look at the diagram again. Thinking of a team or organisation, it’s easy to imagine that each arrow is representative of a person, a component of a larger system. But what if each arrow were representative of a deed or desire in a single organism? The best example I have of this is the poisonous dichotomy of successful-vs-unsuccessful people. Perhaps “successful people” are successful because they get their arrows to converge? Their desires, thoughts, actions and words all point at the same thing, in the same general direction. Whereas “unsuccessful people” are unsuccessful because the parts of themselves are trying to go in different directions.

One final thought—which is really an admission of my own long-held but mistaken assumption: at the individual, local level, convergence is not always better. Often, divergence yields greater tangible and intangible rewards, in both the short- and long-term.