Skip to content
Matthew Sweet Uncategorized March 11, 2018
First: Mark Baker (A.K.A. Guru Anaerobic) made an interesting point: ageing is a declining tolerance of the tails. Generally, the young handle extreme physical and psychological stimuli better than the old. They can endure more, and recover faster from that which they endure. Second: Brent Beshore posted some scenarios that he’d found effective at revealing the character of an individual. I responded by saying that his methods could be reduced to observing how an individual behaves 1) under great duress and 2) when they have a lot of time and attention to allocate. Combining these ideas—the notion of the tails of existence and methods that reveal character—has led me to formulate the following: character is revealed in the tails of existence. 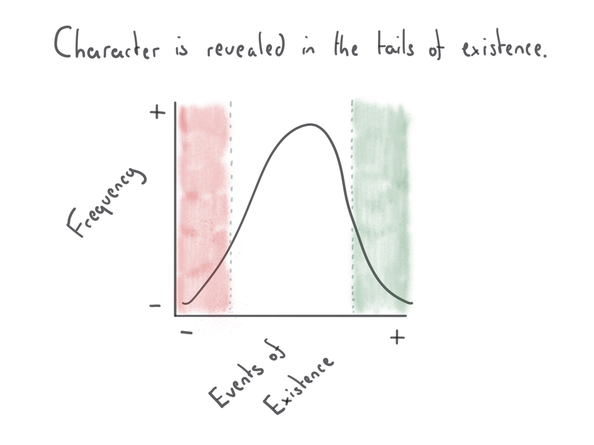 Unimaginable pain and suffering; terrible misfortune; indecipherable chaos; overwhelming pleasure; unlimited wealth; boundless luck; inexhaustible abundance. These things strip all masks, obliterate all facades. But they are not the norm. The extreme events of existence—both the best and the worst—occur infrequently. Thus, only infrequently do we get to see what we ourselves, and others, are really made of.
Published March 11, 2018