Ryan Holiday has this to say about genre conventions and industry innovation in his book, Perennial Seller:

“…these groundbreaking innovations were unconventional in just a few particular, targeted ways, and that was enough.
The point is that you cannot violate every single convention simultaneously, nor should you do it simply for its own sake. In fact, to be properly controversial—as opposed to incomprehensible—you must have obsessively studied your genre or industry to a degree that you know which boundaries to push and which to respect.”

Holiday is advocating a practice similar to that suggested in Blue Ocean Strategy: figure out the popular features of your industry or genre, map their presence or absence in your competitor’s offerings, and then come up with something different. A mundane example: most business cards are of a similar size, shape and material, and contain similar information. To stand out you could alter one or two of those characteristics—instead of a rectangle of card, opt for an engraved coin.

This practice, whilst simple, is quite powerful when it comes to creative and entrepreneurial work. But this practice is more interesting when it is mapped to people.

I’m working on a novel and this involves the process of character creation. I want to create characters that feel like real humans, as opposed to cardboard cut-outs, so I’ve deployed as many lenses as possible. As well as the usual basic information about a character—height, weight, facial features, nuclear family—I also ask myself what Myers-Brigg type they might be, what they carry in their pockets, what they’d take away with them for a weekend, what their Dungeons and Dragons alignment is, and I’ve imagined how they go about an assortment of common tasks and navigate the scenarios of everyday existence. I’ve also toyed with the idea of worldview sliders.

Imagine for a second that we could buttress the human psyche down into a finite number of features. The range of these feature sliders is from totally positive to totally negative. Say, -1 to +1. Now, a normie’s sliders would all hover on one side or the other of zero. But normies make for boring characters in a work of fiction. So. A character’s sliders would mostly hover on one side or the other of zero, with a few narrative-significant exceptions that pushed towards the boundaries. And if we were to make someone “incomprehensible”, as Ryan Holiday says, we would push all the sliders to either minus or plus one. Such a person is neither a normie nor a character; they’d be a societal pariah. Visualised: 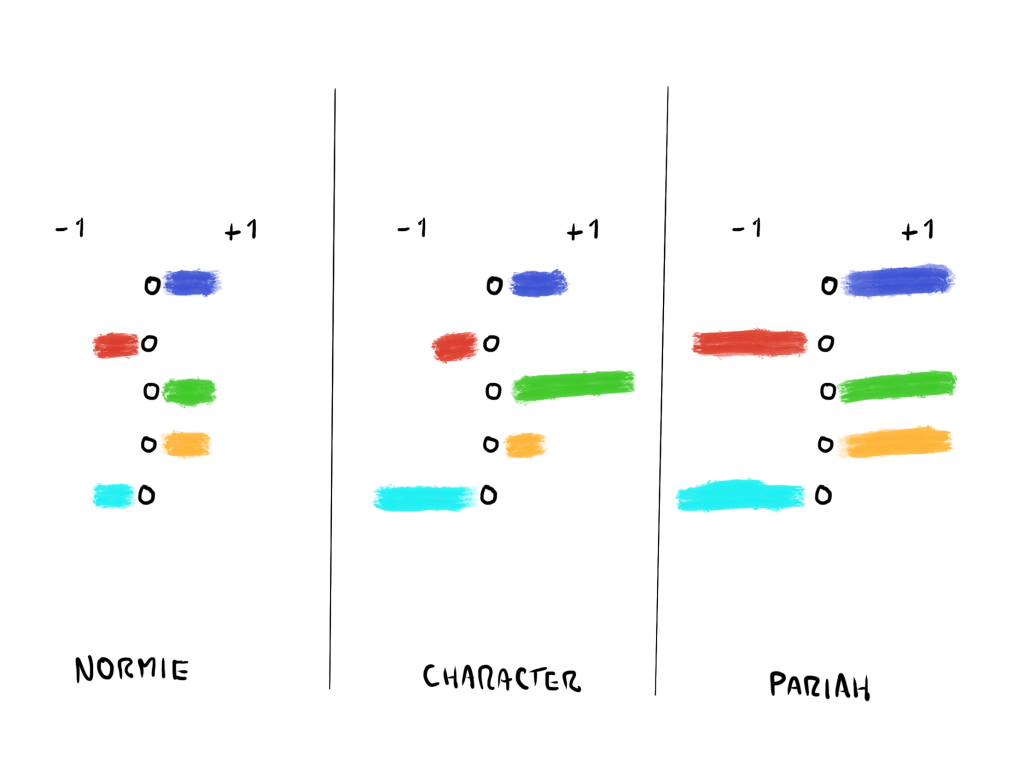 Another way to think of this is using systems from roleplaying videogames like the Elder Scrolls series. These sorts of games typically offer robust character creation mechanics, and often they involve the ability to make aesthetic, as well as gameplay relevant, alterations to a character.

The same trichotomy is present in civil society too. Those who are accepted and functioning parts of society are different from one another, but not too different. Those who are either admired or reviled by a large number of people differ from the norm in more extreme ways—via unusual appearance, mannerisms, interests, political outlook et cetera. Those who differ in every respect can’t get a job, don’t have many friends, and are generally hit with labels like “outcast”, “fringe” and “insane”.

So, sliders can be utilised in creative and entrepreneurial pursuits, to build characters and to interpret the components of a community or civilisation. But they can also be used as tools to mine insight. For example, sliders can be used to explore complex issues like immigration.

A nation’s concerns with immigration policy is mostly about determining how many people to let in. With that single slider there’s a rich vein of questions to ask and insight to extract. “What happens if we let everyone in?” “What happens if we let no-one in?” If we add in another feature, like the benefits granted to immigrants, more possibilities are uncovered. “What if we let everyone in but only grant them status as inferior citizens with limited rights?” “What if we let a select few in but grant them full citizenship and all the rights that accompany it?”

Sliders can also be used to deliberately distort perception. For example, if I move my slider for “Belief that freedom of speech is a fundamental human right” from positive to negative, what happens? How does my perception of the media change? What if I deliberately distort my values concerning the importance of nuclear family, or of the utility of certain technologies, or of the morality of marriage, childbirth or monogamy?

The answer is that I end up in interesting places, seeing things I otherwise wouldn’t. So while the best set of sliders for fitting into the world around me is a set with mostly neutral values, the best set for seeing and thinking about the world is a set where the values are extremely distorted. This is where I think the push for safe spaces and politically correct curriculums in schools is flawed. How we see the world is not the same as how we inhabit it—or, it doesn’t have to be. If we can have the courage to teach our children to see the world from extreme, unusual and ignorant perspectives, then we can end up with future generations that will be able to untangle perception from action. We’ll end up with a society of individuals who can make good decisions that benefit the collective race of humanity. If we don’t, and in the name of safety we continue to censor people’s ability to see from diverse and extreme perspective then we will end up with an extremely unsafe and unpleasant world.