“Conceal your intentions” advises Robert Greene. Why? He goes on to say:

“Keep people off-balance and in the dark by never revealing the purpose behind your actions. If they have no clue what you are up to, they cannot prepare a defense. Guide them far enough down the wrong path, envelope them in enough smoke, and by the time they realise your intentions, it will be too late.”

It is with such pronouncements that my foray into the domain of “strategy” began. And, as expected, it is has been hard to rewire the seemingly revolutionary concepts that marked the early years of my explorations. Fortunately, I have made some progress and my understanding has evolved past such axiomatic realpolitik notions. For example, “concealment” has transformed from an all-pervasive necessity into something applied only to the highest ambitions. Further, I split the domain into grand strategy, strategy, and tactics, came up with different priorities for each one, and placed them into a pyramid: 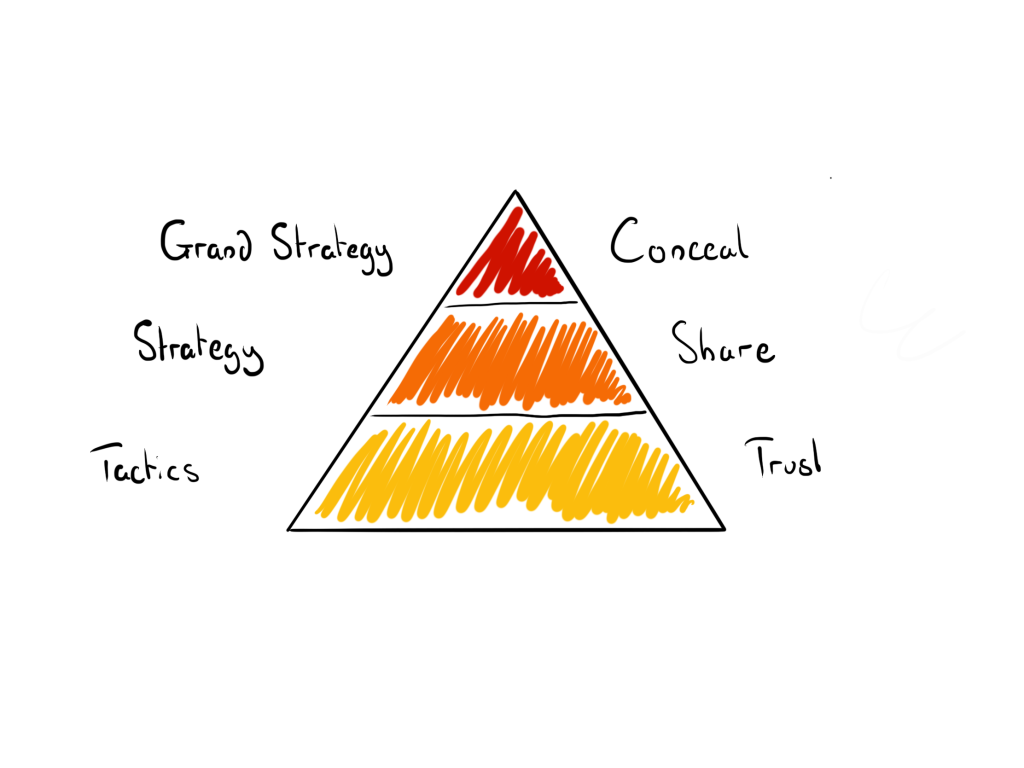 Concealment was still necessary for grand strategy, but I decided that it wasn’t necessary—it was harmful, in fact—for strategy and tactics. After more time immersed in military texts and theory, in macro- and micro- histories, in some conventional business books, and in a good dose of philosophy, I realised there were other, better things to do when it came to strategies and tactics. Briefly stated, strategic ambitions should be shared with the appropriate figures and the tactics required for their attainment should be left to individual or unit initiative. Conceal; share; trust.

But now I’m beginning to question something deeper—the nature of concealment itself, especially in relationship to ambition and audacity.

A NOTE ON ALTRUISM

“Ambition” is a dirty word. In the era of global connectivity, altruistic notions are championed more than ever. Everyone wants to change the world. Everyone wants to make an impact. Every person has to be in it for others. We all want to do our bit and nobody wants to be caught sacrificing someone else for the sake of their personal ambition.

Of course, all this posturing is bullshit. As noted in The Dictator’s Handbook, politics is about the attainment, maintenance, and growth of personal power, no matter how beneficent the person making a claim for it appears to be. Similarly, altruism is simply the most deceptive of gowns for ambition. It’s not so much that we want to change the world; more that we want to be seen changing the world. A thought experiment illustrates this. Consider yourself in the following scenario:

A priest in mottled brown robes appears in front of me. He asks, “What is it that you desire?”
I reply, “The extermination of poverty; the equal distribution of wealth. The indefinite end of pain and suffering.”
He raises a brow for a moment, and then nods. “It shall be done.”
My jaw drops, but before I can proclaim my astonishment and indicate my disbelief, the priest raises a finger. “However,” he says, “there must be a sacrifice.” I nod, wary, and he continues. “This will happen if you consent to be damned for eternity. You will never know rest. You will never again know peace. Your body will be destroyed again and again and your mind will be preserved so that you experience this unyielding torture with unerring clarity—no escape via insanity. Your existence will be an endless succession of unimaginable pain and incomprehensible suffering. I—pardon me—my Lord can take pain and suffering from this world, but someone must still bear it in its full magnitude and duration. Will you?”

How many people do you think would take that trade?

As indicated above, ambition—supposedly—requires concealment. And it would follow that the grander the ambition, the more concealment is necessary. Which raises a question: how do we even quantify ambition? The simplest way is with the concept of collective impact. The larger the impact on a collective—either positive or negative—the more ambitious something is. Another way to quantify it is by measuring an ambition’s divergence from societal norms. So, something that positively impacts five people and is relatively run-of-the-mill—like planning a surprise holiday—is less ambitious than trying to undermine the incumbents of the oil industry by developing technology that could make reliance on oil a thing of the past. Both require concealment, but the former less so than the latter.

But there is another question. Now that we have a measure for ambition we can ask, “Who in history has had gigantic ambitions and gone on to see them fulfilled?” I’m sure that you can think of a few people. But the first name that comes into my mind is Mr Adolf Hitler.

THE PAINTER OF A TERRIBLE REALITY

In the 1920s Hitler released Mein Kampf. In that book he laid out his foundational ambitions: the annihilation of his universal scapegoat—the Jew—and the relentless expansion of the German Reich into the lands of the East. Hitler’s most recent biographer Volker Ullrich quoted him as saying, “No one else has ever explained and written down what he intends to do more often than I have.” Another one of his biographers, Alan Bullock, said: “Hitler’s originality lay not in his ideas, but in the terrifying literal way in which he set to work to translate these ideas into reality, and his unequalled grasp of the means by which to do this.”

As we all know, in the years that followed Hitler’s ascension to Chancellor of the Reich these ambitions were mostly—if only temporarily, in the case of the land grabs—accomplished. Austria, Poland, Czechoslovakia, France, Luxembourg, Belgium, the Netherlands, and vast portions of the Soviet Union fell. And millions of Jews were slaughtered. Hitler said what he was going to do, many times, and did it.

This reminds me of times where I have sparred with certain people during Brazilian jiu-jitsu sessions. I’m under fire and I know they’re trying to choke me into submission, so I do my best to prevent it. They know that I know what they’re trying to do, but still they proceed to do it anyway. My knowledge of their intent is not enough for me to prevent it from becoming reality.

It is this which has me questioning the utility of concealment. Hitler was terrifyingly ambitious and he made no secret of the intentions that he later went on to convert to reality. Was that a blunder, or sound strategy?

THE UTILITY OF CONCEALMENT

The latter, I think. Further, if we plot “scale of ambition” on a graph alongside “utility of concealment” I believe we end up with a bell curve.

Concealment is still useful for moderate ambitions, for the visions commonplace to readers of The 48 Laws of Power and The 36 Stratagems for Business. For example, the takedown of Gawker was undertaken with the aid of concealment. For a long time people were wondering, “Who’s backing Hulk Hogan?” Spoiler alert. It was Peter Thiel.

Indeed, a billionaire pursuing a personal vendetta against a media organisation is a pretty hefty scheme. It’s more ambitious than, say, me wanting to be able to do twenty pull-ups in a row, but it’s way less ambitious than trying to eradicate worldwide poverty or destroy a race of people I have an issue with. It is definitely an ambition of moderate scale. (Aside: the publishing date of the book about the saga—Conspiracy by Ryan Holiday—was concealed. Holiday’s publisher said it would be out earlier than it was. This was to deter others from writing about the same events—they manufactured the perception of a fait accompli.)

In fact, concealment probably has negative utility for minor and massive ambitions. In both cases, concealing the desired ends impairs the means available to achieve them. For example, if I were to keep my Pull-Up Quest under wraps and speak of it only in hushed whispers I’d likely miss out on a lot of useful stories, sources and solutions that others doing the same thing have come across. Similarly, if I keep to myself that I am trying to solve the riddle of cancer then I bar myself from co-ordinating with a lot of people who have, one, deep expertise in different but important domains, and two, from those with the will to pour resources into various exploratory ventures.

Network effects are tremendous for both minor and massive ambitions.

What to do about this? Simple. Go bimodal.

In Antifragile, Nassim Taleb identifies the “barbell” as an excellent risk management strategy. He uses the example of finance and says that someone with investments in many virtually zero-risk assets and a few incredibly high-risk assets is in a better position than someone with all their eggs in a moderate-risk basket. The former faces a small chance of absolute ruin and a small chance of practically unbounded upside. The latter, however, faces a moderate chance of absolute ruin and has access to only a bounded upside.

Similarly, I believe that, when it comes to ambition, it’s best to have many minor ambitions and a few stonkers, all of which require no concealment, as opposed to a slew of moderate ambitions that all require secrecy. Why? Because concealment is costly. Especially in our connected world, where everyone could talk to anyone, where many are reputation-dependent, where outrage mobs and shaming gangs roam, and where private and personal information is both a commodity and a valuable gem—depending on the context. Better to be open and channel all your energy into your various undertakings—both little and large—than to waste some of that precious resource on concealment.

When it comes to ambitions the best place to put them is in plain sight. If, like Arya in the most recent series of Game of Thrones, you plan to kill the Queen, say so. No-one will believe you anyway. They might even laugh and offer you some homemade wine and a seat by their campfire. And if your ambition is local and severely constrained, of consequence to only a few people? There’s no point hiding it. People won’t care as it likely won’t upset their own personal equilibrium. And besides, they probably have their own secrets to conceal.