In Solutions to the problem of life, I acknowledged my tendency to get caught up on the first of the Buddha’s Four Nobles Truths—Life is suffering. Realising that that wasn’t exactly useful, I attempted to find a way past it. As a consequence of releasing that piece, Harry Potash was nice enough to point me towards something a suffering-fixated person like me might find interesting…

The Abolition Project is what prominent transhumanist David Pearce calls the attempt to abolish unpleasant experience from the life of humans and non-humans. It is also the title of a talk Pearce gave at Oxford’s Future of Humanity Institute in 2007.

Now, I don’t have much familiarity with transhumanism, or enough grounding in the disciplines it draws on—evolutionary biology, genetic engineering, moral philosophy, etc.—to critique and comment upon what he said. But I can include the extracts from the talk that I found most provocative. (If you wish to skip ahead do. They have no bearing on what is to come.) First:

“Unfortunately, attempts to build an ideal society can’t overcome this biological ceiling, whether utopias of the left or right, free-market or socialist, religious or secular, futuristic high-tech or simply cultivating one’s garden. Even if everything that traditional futurists have asked for is delivered – eternal youth, unlimited material wealth, morphological freedom, superintelligence, immersive VR, molecular nanotechnology, etc – there is no evidence that our subjective quality of life would on average significantly surpass the quality of life of our hunter-gatherer ancestors – or a New Guinea tribesman today – in the absence of reward pathway enrichment. This claim is difficult to prove in the absence of sophisticated neuroscanning; but objective indices of psychological distress e.g. suicide rates, bear it out. Unenhanced humans will still be prey to the spectrum of Darwinian emotions, ranging from terrible suffering to petty disappointments and frustrations – sadness, anxiety, jealousy, existential angst. Their biology is part of “what it means to be human”.”

“If there weren’t something fundamentally wrong – or at least fundamentally inadequate – with our existing natural state of consciousness bequeathed by evolution, then we wouldn’t be so keen to change it. Even when it’s not unpleasant, everyday consciousness is mediocre compared to what we call peak experiences. Ordinary everyday consciousness was presumably adaptive in the sense it helped our genes leave more copies of themselves on the African savannah; but why keep it as our default-state indefinitely? Why not change human nature by literally repairing our genetic code?”

Third (in response to a proposed genetic solution to the problem of suffering):

“First, this genetic recalibration might seem to be endorsing another kind of uniformity; but it’s worth recalling that happier people – and especially hyperdopaminergic people – are typically responsive to a broader range of potentially rewarding stimuli than depressives: they engage in more exploratory behaviour. This makes getting stuck in a sub-optimal rut less likely, both for the enhanced individual and posthuman society as a whole.
Secondly, universal hyperthymia might sound like a gigantic experiment; and in a sense of course it is. But all sexual reproduction is an experiment. We play genetic roulette, shuffling our genes and then throwing the genetic dice. Most of us flinch at the word “eugenics”; but that’s what we’re effectively practising, crudely and incompetently, when we choose our prospective mates. The difference is that within the next few decades, prospective parents will be able to act progressively more rationally and responsibly in their reproductive decisions. Pre-implantation genetic screening is going to become routine; artificial wombs will release us from the constraints of the human birth-canal; and a revolution in reproductive medicine will begin to replace the old Darwinian lottery. The question is not whether a reproductive revolution is coming, but rather what kinds of being – and what kinds of consciousness – do we want to create?
Thirdly, isn’t this reproductive revolution going to be the prerogative of rich elites in the West? Probably not for long. Compare the brief lag between the introduction of, say, mobile phones and their world-wide adoption with the 50 year time-lag between the introduction and world-wide adoption of radio; and the 20 year lag between the introduction and world-wide penetration of television. The time-lag between the initial introduction and global acceptance of new technologies is shrinking rapidly. So of course is the price.”

“From a notional God’s-eye perspective, I’d argue that morally we should care just as much about the abuse of functionally equivalent non-human animals as we do about members of our own species – about the abuse and killing of a pig as we do about the abuse or killing of a human toddler. This violates our human moral intuitions; but our moral intuitions simply can’t be trusted. They reflect our anthropocentric bias – not just a moral limitation but an intellectual and perceptual limitation too. It’s not that there are no differences between human and non-human animals, any more than there are no differences between black people and white people, freeborn citizens and slaves, men and women, Jews and gentiles, gays or heterosexuals. The question is rather: are they morally relevant differences? This matters because morally catastrophic consequences can ensue when we latch on to a real but morally irrelevant difference between sentient beings. [Recall how Aristotle, for instance, defended slavery. How could he be so blind?] Our moral intuitions are poisoned by genetic self-interest – they weren’t designed to take an impartial God’s-eye view. But greater intelligence brings a greater cognitive capacity for empathy – and potentially an extended circle of compassion. Maybe our superintelligent/superempathetic descendants will view non-human animal abuse as no less abhorrent than we view child abuse: a terrible perversion.”

“The last frontier on Planet Earth is the ocean. Intuitively, running compassionate ecosystems might seem too complicated. But the exponential growth of computer power and nanorobotic technologies means that we can in theory comprehensively re-engineer marine ecosystems too. Currently such re-engineering is still impossible; in a few decades, the task will be computationally feasible but challenging; eventually, it will be technically trivial. So the question is: will we actually do it? Should we do it – or alternatively should we conserve the Darwinian status quo? Here we are clearly in the realm of speculation. Yet one may appeal to what might be called The Principle Of Weak Benevolence. Unlike the controversial claim that superintelligence entails superempathy, The Principle Of Weak Benevolence doesn’t assume that our technologically and cognitively advanced descendants will be any more morally advanced than we are now.”

I actually read the talk, in full, a few times. The ideas it contains are new to me and so they raised multiple questions. But the first question they raised was not the one I was expecting: What happens to stories in a suffering-free world?

The simplest model for a story I’ve come across is Kurt Vonnegut’s “story graphs”. They look something like this: 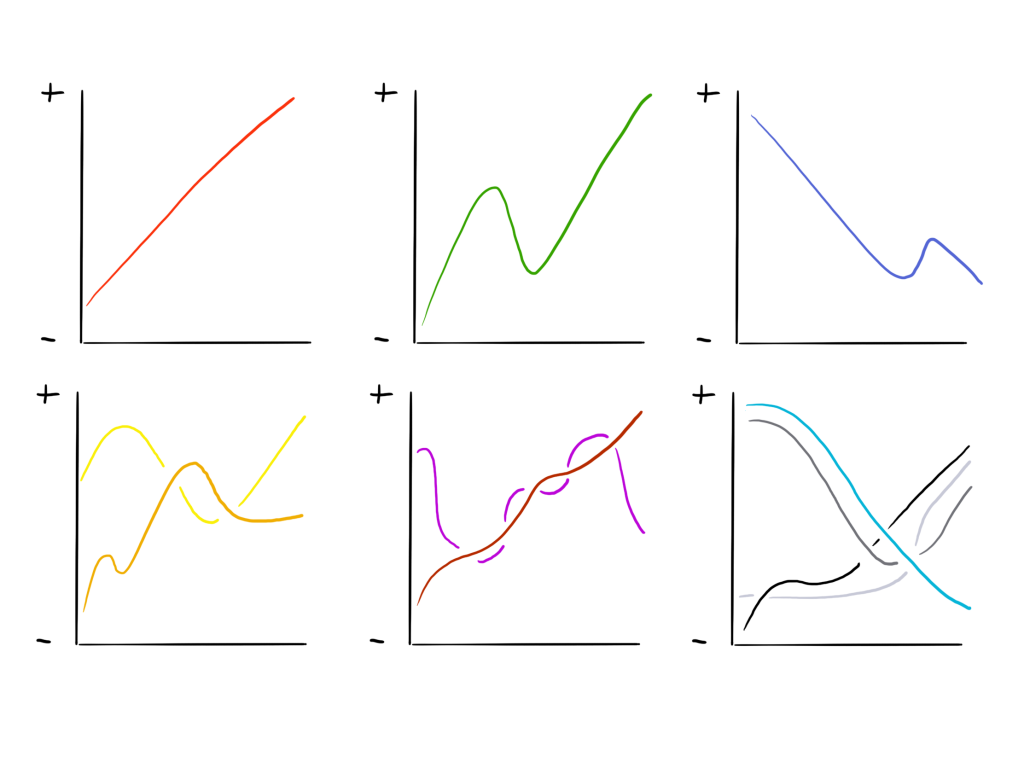 Here, the plus and the minus can be as simple or as complex as you like. They could chart a protagonist’s progress towards his goal. They could be multiplied and comment on multiple character’s journeys. There could be a different one for both the character’s explicit objective and his or her implicit objective and the story could be about the conflict between the two values. They could be used to represent transitions between material wealth and poverty, or between philosophical or psychological abundance and scarcity. However they are used, they can form the foundation for understanding or producing a story in multiple mediums. But the aim of the “abolitionist project” is to abolish suffering and unpleasant experience—so, in essence, we lose the bottom half of the graph. But what happens then? 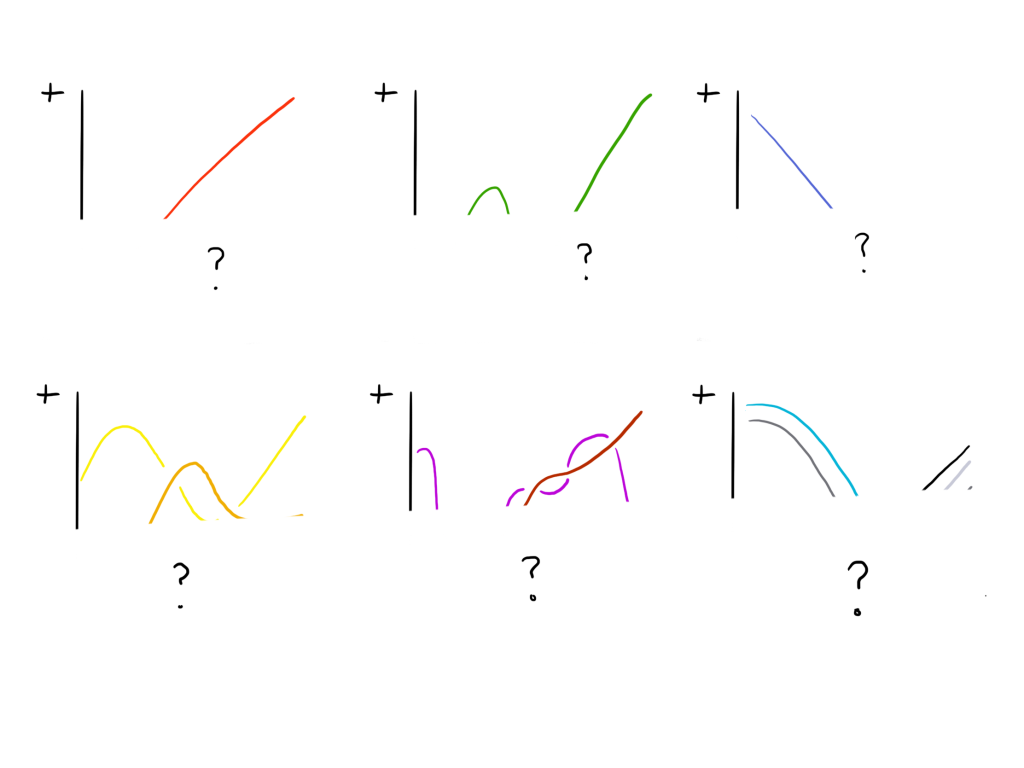 The first answer is obvious: we move the goalposts. Stories will no longer be tales of transitions between good and bad, but recounting of movements between good and better. A villain will no longer be Evil, he’ll just be Less Good than the average hero, for example. Pearce uses the phrase “gradients of bliss”—stories in a suffering-free world will be about the peaks and troughs of those gradients. 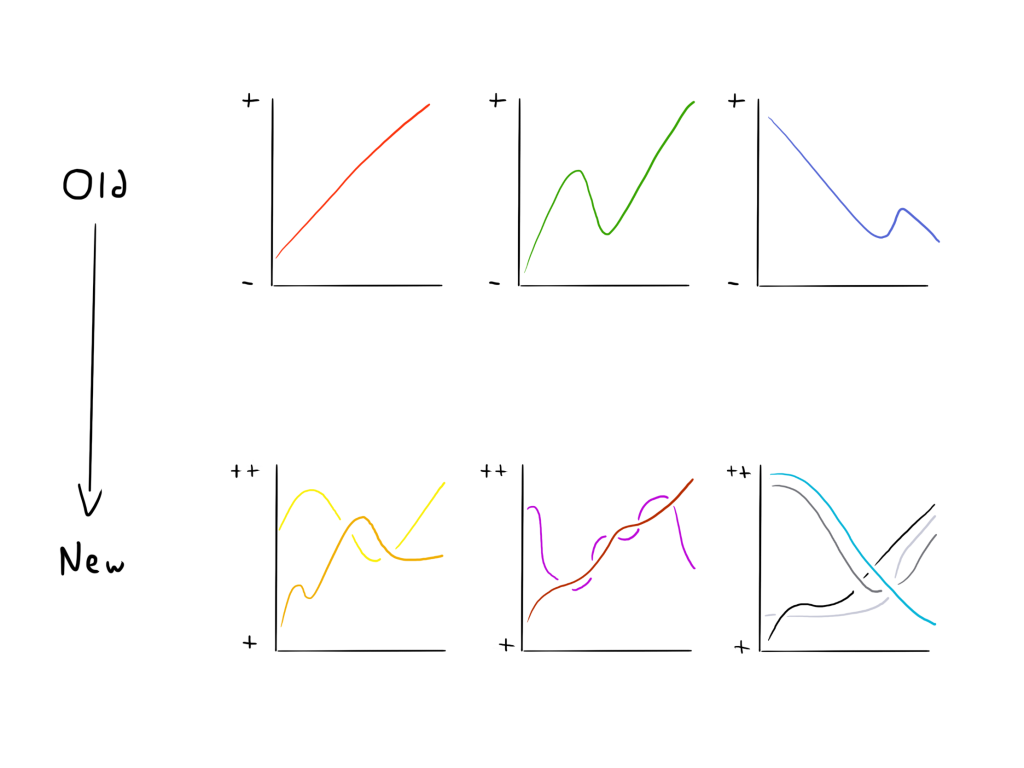 The second answer is a bit weirder, and the easiest way to understand it is with a reference to technological pastoralists. These are people who think it’d be a good idea to regress to a state where technology is less advanced because humanity was less corrupted back then. Sometimes, though, these people act on that belief and move to a farm to grow their own turnips. Imagine that the transition to a post-abolition society is complete and the generations with concrete experience of pre-abolition society have died. All that will remain of experienced-suffering are the records preserved in various media. And in the same way that people LARP around to find out what a pre-technological existence was like, people will want to LARP around and find out what a pre-abolition existence was like.

Pearce says, in the talk linked above, that “happier people – and especially hyperdopaminergic people – are typically responsive to a broader range of potentially rewarding stimuli than depressives: they engage in more exploratory behaviour.” I don’t think it’s much of a leap to claim that once we’ve abolished suffering and ceased to remember what it feels like, then our new, more-predisposed-to-exploration selves will get curious and engage in small-scale recreation experiments. And of those who are brave enough to engage in the experiments, there are going to be some who come back and decide to record it.

John McPhee, in Writing by Omission, talked of Hemingway and his tendency to leave what he knew out of his work.

“And inevitably we have come to Ernest Hemingway and the tip of the iceberg—or, how to fashion critical theory from one of the world’s most venerable clichés. “If a writer of prose knows enough about what he is writing about he may omit things that he knows and the reader, if the writer is writing truly enough, will have a feeling of those things as strongly as though the writer had stated them. The dignity of movement of an iceberg is due to only one-eighth of it being above water.” The two sentences are from “Death in the Afternoon,” a nonfiction book (1932). They apply as readily to fiction. Hemingway sometimes called the concept the Theory of Omission. In 1958, in an “Art of Fiction” interview for The Paris Review, he said to George Plimpton, “Anything you know you can eliminate and it only strengthens your iceberg.” To illustrate, he said, “I’ve seen the marlin mate and know about that. So I leave that out. I’ve seen a school (or pod) of more than fifty sperm whales in that same stretch of water and once harpooned one nearly sixty feet in length and lost him. So I left that out. All the stories I know from the fishing village I leave out. But the knowledge is what makes the underwater part of the iceberg.””

In a post-abolition society there will be a gap in the market—people who have experienced suffering—and it won’t take long for it to be filled. It’ll be like wireheading (“direct stimulation of the pleasure centres of the brain via implanted electrodes”), but for pain instead of pleasure. We’ll go to some nondescript building, sign some forms, get hooked up and be run through the gamut of the original human emotional spectrum for however long we think counts as “authentic”. We’ll then unhook, run off back to our co-working space and get to work on a piece for that New Media outlet.

Stories, post-abolition, will involve a recalibration of traditional axis, but they will also present storytellers with an opportunity to experience an unaltered consciousness.