Skip to content
Matthew Sweet Uncategorized June 29, 2017
Do you know what the OODA loop is? If you do, fantastic. High-five. If not, then don’t worry. All you need to know is that it’s part of a time-based theory of conflict, and that the central insight of it’s creator John Boyd was that maneuverability and tempo matter more than anything else in combat. From Boyd: The Fighter Pilot Who Changed the Art of War:

“Germany’s blitzkrieg attack against France in 1940 and the Israeli’s lightning-fast raid at Entebbe Airport to free hostages seized by Uganda. In both instances the ability to transition quickly from one maneuver to another was a crucial factor in the victory. Thinking about operating at a quicker tempo — not just moving faster — than the adversary was a new concept in waging war. Generating a rapidly changing environment — that is, engaging in activity that is so quick it is disorienting and appears uncertain or ambiguous to the enemy — inhibits the adversary’s ability to adapt and causes confusion and disorder that, in turn, causes an adversary to overreact or underreact. Boyd closes the briefing by saying the message is that whoever can handle the quickest rate of change is the one who survives.”

Boyd taught that victory is analogous to the creation of temporal disparity. Watch Stephen Curry play basketball. Often you see him create these temporal disparities. For instance, I saw one highlight where he was on the three point line, with a defender rushing towards him. Curry faked a shot, then faked one dribble as if to move past the defender, but instead of moving closer to the basket, he stayed in his original spot and drained the three. The defender realised he was caught out by the fake, then saw Curry moving towards the basket so he turned to chase him down, but Curry wasn’t there. Watch it in this video. That’s temporal disparity. That’s the power of the OODA loop. 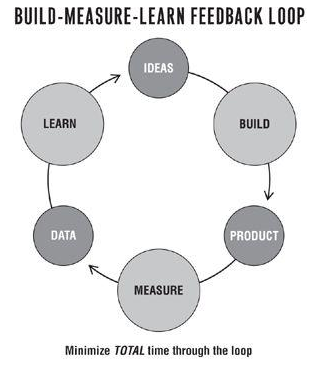 Look at what it says at the bottom: “Minimize TOTAL time through the loop”. Sound familiar? What Ries is advocating for is many, many rapid attempts to calibrate your ideas and match them to reality.

All this is very different from conventional wisdom which says that plans and strategies should be formulated and executed over long periods of time. Boyd discovered this is bullshit. He realised that long term strategies can be replaced with rapid cycles of observe-orientate-decide-act which are guided by a high level idea.

Why am I talking about this? Because it has a big impact on how we manage our lives.

On my desktop, I have two folders—they link to my commons and my Dropbox— and one .txt file. The .txt file is called “root”. It contains what I call “Cycles”—the things I do on a daily, weekly, monthly and half-yearly basis—as well as “PPP”—which stands for “Priority, Projects, Periphery”—”RPR”—which is my procedure for a weekly review, planning and reflection session—and “Plan”, which is a roadmap for the week ahead.

All of the above structures are designed with the idea of tempos and fast transients in mind. See, if you apply Boyd’s time-based theory of conflict to life management what you come up with is the idea of course corrections.

Imagine you’re going on a journey. Perhaps you’re sailing across the Atlantic. Will it be more efficient and more effective for you to check your co-ordinates and heading more often or less often? Should you check your position and current path every few days or every hour?

Obviously, the latter, more often. When it comes to navigation, an error of a few degrees over a relatively short distance is inconsequential. But an error of half a degree over an incredibly long distance is tragic. Think in universal terms, in light years. If we could travel to the furthest reaches of the universe, we would pay dearly for sloppy navigation; a mis-estimation of a single degree could result in us being many, many millions of miles off-course.

This is one of the interesting things that creating the “root” file has made me think about. See, when I was putting it together, I knew I needed some sort of regular reflection process or method. I looked at a variety, and many of them were these long, drawn-out procedures meant to be completed once, or at most, twice a year. They advocated infrequent, major course corrections over rapid, minuscule ones. Which didn’t sit right with me, especially as I recalled the OODA loop.

So now I have no reflective process that I complete every month. There’s no yearly reviews. All there is is daily journaling and a weekly session in which I review the week past, plan the week ahead, and reflect using the following procedure:

“> Reflect. In notebook, 1) Review and update PPP. 2) Either complete an exploration of status and trajectory of each project and current priority OR engage in freeform wonderings about one of the following: alignment between desired outcomes and current processes, conduct in personal and professional relationships, values and principles and their manifestation in your life, mindfulness, or an appreciation of the little things, refactored perception; deliberately distorting how you see, current obstacles and difficulties, current strengths and opportunities, the one thing that matters.”

Essentially, my thesis is that, in an increasingly chaotic world, you can fore-go long-range planning and milestone-based reflection in favour of small, rapid re-calibrations and re-alignments, and still come out ahead.
Published June 29, 2017