Skip to content
Matthew Sweet Uncategorized July 1, 2017August 19, 2021
Many religions say that it’s impossible—and inadvisable—to say what God is, so they say what God isn’t. I’d like to take a similar approach with the idea of ego. At least in the beginning.

But as I sit here and try to do that, I find that it’s hard. “Ego” has a lot of meanings and is the beneficiary of numerous associations. It’s a concept quite central to the study of multiple disciplines—psychology, philosophy and linguistics come to mind—so it’s actually quite difficult to say, “The ego is not…” Let me try a different tact.

When I search “ego” among the first results are a line of lawn equipment, an “online trend-led sassy footwear brand representing a movement of stylish shoeaholics from all over the world” (something straight out of Douchebag Strategist’s lexicon), and two results concerning a character in the Marvel Universe of the same name. 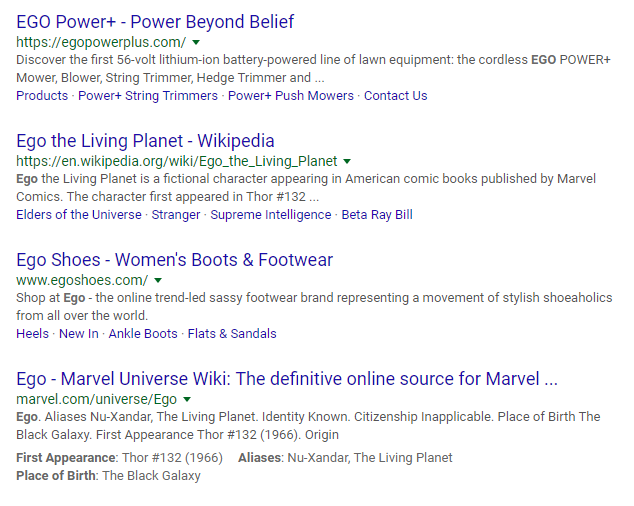 While these things may be interesting, they’re not what I’m looking for. I want to explore the idea of “ego death”, and to do that, I first want to come to terms, to understand exactly what is meant by “ego”.

The Wikipedia page for “ego” points to five alternate interpretations. The first, predictably, refers to Freud’s structural model of the psyche, of which ego is one part—the others being “id” and “super-ego”. The second refers to the idea of “self-concept”, which is perhaps easiest to define as the answer we give to the question, “Who am I?” The third refers to the pronoun, “I”. The fourth leads to “egoism”, which is defined as “excessive conceit, vanity and pride”. This fourth interpretation can probably be sheltered under the fifth, the idea of “egotism”. “Egotism is the drive to maintain and enhance favourable views of oneself, and generally features an inflated opinion of one’s personal features and importance. It often includes intellectual, physical, social and other overestimations.”

I’m going to focus on three of the above:

​Before I do that though, I want to know where the word “ego” comes from and what’s it’s associated with in popular culture.  After some quick digging, it seems that “ego” is simply the Latin version of “I”. And it’s associations? Let me pull out my Roget’s Thesaurus…

When I look up “Ego”, Roget’s points me to “intrinsicality”, “self”, “spirit” and “subjectivity”. The first of these, intrinsicality—which my spellcheck is asserting isn’t an actual word—is the most interesting. Here are some of the associated words it throws up. Do these not come quite close to how we implicitly think about the idea of ego?

Out of all of these, sine qua non is the one that first caught my eye. But only because I didn’t know what it meant. So I looked it up. And as I recite what I found, keep the idea of “ego death” in mind; it may have some forbearance on what we find in this series…

“Sine qua non … is an indispensable and essential action, condition, or ingredient. It was originally a Latin legal term for “[a condition] without which it could not be”, or “but for…” or “without which [there is] nothing”.